Quantstamp is the industry leader in “blockchain security” by technology and market dominance and a team of world-class security experts & PhDs with thousands of citations in academia.

Syndicate turns crypto wallets into investment DAOs with the vision of building the investing infrastructure for Web3, and it aims to become an integrated asset management platform with interoperable protocols and applications. 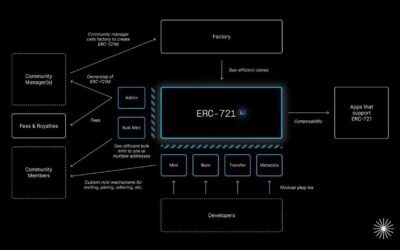 The New Social Protocol of Syndicate — Collectives and ERC-721M

Syndicate was co-founded by Ian Lee & Will Papper with the vision of building the next generation of investing infrastructure. They believe in...

END_OF_DOCUMENT_TOKEN_TO_BE_REPLACED

Quantstamp is the industry leader of “blockchain security” by technology and market dominance and a team of world-class security experts & PhDs with thousands citations in academia. Quantstamp has protected over $200B digital asset risk for 250+ smart contracts with 70+ of them being the top 100 cryptocurrencies.

With 300~500% annual revenue growth for 4 years in a row (2017-2021) since the founding of Quantstamp, Outliers Fund I & II exited the QSP tokens with substantial returns. In 2021, Outliers Fund III was given a lead investor / advisory offer to invest in Quantstamp’s Pre-A equity round.

As an incubator and 3-times investor, Quantstamp always refers Outliers super early-stage deals when they spotted valuable smart contracts, even before these founders start to fundraise, and offers startups backed by Outliers an exclusive auditing speed and pricing. Prysmatic Labs (Ethereum 2.0) is a perfect example. In 2022, Quantstamp raised $100M+ at a $1.03B post-money valuation Series A round led by SoftBank, Pantera and Commonwealth, making Quantstamp the first unicorn company from the portfolios of Outliers Fund III.

Outliers Fund III invested $500K / $1M in Analog’s 1st / 2nd round as lead investor and the largest backer of Analog.

Analog is an interoperable layer-0 blockchain, which invented a new Proof-of-Time (PoT) consensus algorithm to fetch and write time data between traditional and decentralized applications utilizing zk-SNARKS, and built the first decentralized time data marketplace. We believe in the next few years, every protocol and application will need one thing in common: decentralized, permissionless, and trustless time data and it is exactly what Analog is shipping.

Co-founder Victor Young is a serial entrepreneur and angel investor who has multiple venture exits, including Hyperloop One (acquired by Virgin Group), DocSend (acquired by Dropbox), ONTheGO Platforms (acquired by Atheer), etc. Co-founder Sanchal Ranjan is a product guru who has been through Y Combinator multiple times and shipped numerous products with millions active users. Analog has a solid team of Web2 founders and Web3 natives.

In April 2022, Outliers invested the first check $500K in Analog’s 1st round as lead investor, lining up investors for Analog to pitch and for us to do reference calls everyday. Analog’s first round ended up being oversubscribed in 4 weeks with a strong cap table of VCs (Tribe Capital, Basecamp Fund, Master Ventures), influencers (Fred Smith, Joi Ito, Balaji Srinivasan), venture DAOs (OrangeDAO, SolrDAO) and portfolios of Outliers Fund (Quantstamp, XYO, Binance).

In August 2022, Outliers invested $1M in Analog’s 2nd round as lead investor and became the largest shareholder.

Syndicate turns crypto wallets into investment DAOs with the vision of building the investing infrastructure for Web3, and it aims to become an integrated asset management platform with interoperable protocols and applications.

Syndicate’s “Investment Club” has democratized the venture fund set up process from 1-2 year time with $100-200k expense to 1 minute and 0.01 ETH. Only six months after the launch of Syndicate, there are 25,000+ venture DAOs on the platform. Outliers Fund III was deployed on Ethereum via Syndicate, where our LPs can trace all the transactions in real-time (Radical Transparency). In addition, the Investment Club structure allows Outliers Fund to efficiently make deal-based payouts to all the GPs and LPs based on their ownership shares (Operational Efficiency).

Syndicate’s “Collectives”  enables anyone to create on-chain social networks with ERC-721M composable NFTs. Outliers launched the first Collective – Outliers Research Fellow – on Syndicate, to incentivize scientists from all over the world to collaborate with us by minting an NFT as membership access to our shared knowledge base and as ownership shares for all of our future research publications and IPs (Collective Intelligence).

In 2022, Outliers led Syndicate’s Strategic Customer round, which was only open to the top 1% most active DAOs on Syndicate. Outliers became the first successful case study of Syndicate, for both Investment Clubs and Collectives.